Milestones in history: The 1990s

The State Pension Fund was established at the beginning of 1990 as the result of the incomes policy negotiation process.

The State Pension Fund started its operation in early 1990.

The fund is managed by the State Treasury. The fund’s board of directors, appointed by the Ministry of Finance, decides on the investment principles of the fund and is in charge of the fund.

Quality is included in the annual performance agreement of each profit centre at the State Treasury. This means that quality is constantly being monitored as a performance indicator. The systematic development of quality work was started in 1992, organised in all units in 1994 and implemented in 1995.

The systematic development of quality work was started in 1992.

Once a year, each profit centre performs a self-assessment of quality for the operations of their own unit, and the extended board of directors does the same for the entire agency. The first self-assessments of quality were performed in 1996. In 1999, an internal quality application was carried out, in which units would score each other’s operations with the help of a consultant with extensive expertise in quality.

For the first four years, we would use the assessment criteria defined for ‘Suomen laatupalkinto’ (the Excellence Finland award). In 2000, we started using the criteria for the European Foundation for Quality Management. In keeping with the assessment criteria, we focus on evaluating our operation and constant improvement. Our goal is to improve our functions, services and products along with personnel well-being.

Efficient operations require systematic leadership and actions focusing on customer needs in central government, too. Process management is a key ingredient in successful operations. It focuses on the design, direction and improvement of the processes related to the products and services the organisation produces while striving for smooth operations, cost-efficiency and error prevention. It is also important to pay attention to support processes as well as the management of supplier and cooperation processes.

Our existence is not an end in itself. We are here to provide quality services to our customers and other cooperation parties. By continually improving our operations, we ensure that we can keep offering these services going forward.

The areas of assessment have been grouped into eight entities: leadership, strategic planning, customer and market focus, data and data analysis, personnel development, process management, result orientation and social impact. Each assessment area and its sub-theme is assessed in light of three factors: do we employ an agreed method, how do we apply said method and how do we improve our operations in this regard.

The assessment is carried out by external auditors when an organisation applies for the excellence award. 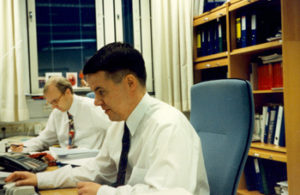 State Treasury dealers at work in 1996.

Government borrowing was transferred in its entirety from the Ministry of Finance to the State Treasury in the beginning of 1998. As Finland’s membership in the EMU was getting nearer, it would soon no longer be sensible to categorise loans into domestic and foreign. In the EMU, government borrowing could be carried out in the new domestic currency, the euro.

Centralising borrowing made the operations more efficient, as all of the expertise related to debt management could be found in the same place.

Finland joined the ranks of countries to issue Eurocurrency credit by issuing a loan of EUR 2 billion on 6 May 1998. The loan had a maturity of 11 years and would expire in April 2009.

Countries to beat Finland in the race to issue Eurocurrency loans in 1998 included Italy, Spain, Greece and last but not least, Sweden. Nevertheless, Finland can be considered the first of its kind. The loan issued by Finland was the first loan to be domestically documented by a country that had been a member of the EMU from the start. A loan issued by Sweden two weeks prior was also documented in domestic form, but Sweden did not become a member of the EMU in 1999. Eurocurrency credit issued by other countries have conventionally been Eurobonds, whose legal form differs from domestic loans.

Preparing for the EMU

The Eurocurrency loan was ultimately issued for strategic reasons. In the short term, issuing loans in euros was slightly more expensive than in Finnish marks. In theory, Finland could have secured the same loan for approximately 0.05 percentage points less in marks, albeit raising 12 billion marks from the domestic finance market in a short period of time would have been impossible. The most important goal of the loan was to expand the Finnish base for investors and attract new investors for domestic government loans.&nbsp; An extensive investor base does its part in reducing the loan’s volatility in the aftermarket. The Eurocurrency loan also reminded those who had previously invested in Finland of our country, seeing as the previous foreign transaction in Finland had occurred nearly a year earlier. Indeed, the State Treasury estimated that the long-term benefits of the loan more than covered the short-term costs.

Expanding the investor base was important ahead of the coming conditions in the EMU. Many domestic investors planned on diversifying their investments from Finnish State bonds to foreign investments once the exchange rate risk within the Eurozone was terminated. This meant that the State needed to expand its investor base outside the domestic market and introduce foreign investors to domestic bonds and the domestic auction system that would be continued in the EMU.