Milestones in history: The 1980s 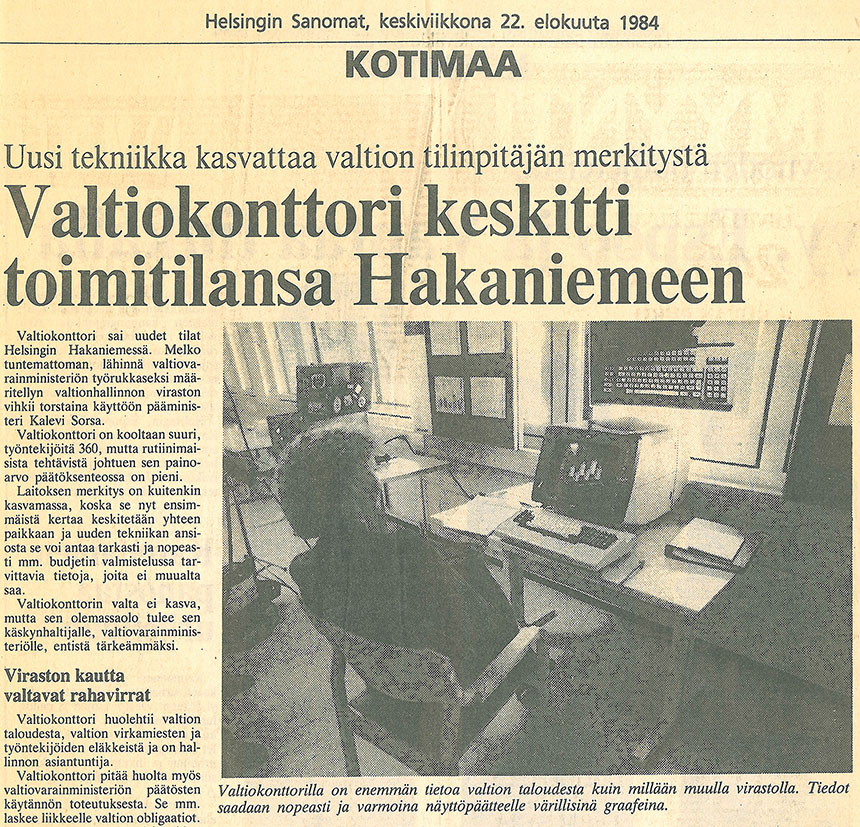 The State Treasury moved into new premises in Hakaniemi in 1984.

1987 In the beginning of March in 1987, the civil department of the State Accident Compensation Office was merged with the State Treasury. The merger had been in the works for more than a decade. The similarity of the tasks between the pensions division at the State Treasury and the civil department of the State Accident Compensation Office prompted the merger. The preparatory work took the form of many different working groups, which produced proposals that were in stark contrast to each other. Some proposed that the pensions division should be incorporated into the State Accident Compensation Office, and vice versa. On 1 March 1987, the new Compensation and Benefits Department of the State Treasury was established with 72 employees transferred from the State Accident Compensation Office. The department, which is now called a unit, was in charge of compensation based on legislation on accidents and traffic insurance, compensation in the event of termination based on the Civil Service Act, financial support corresponding to a group life insurance as well as compensation for crime damage, for example. 1989 Central government has been a supporter of comprehensive early-stage rehabilitation for more than a decade. The operations are aimed at stopping processes that reduce the ability to work and preventing incapacity for work early enough to prevent the significant deterioration of the capacity for work. In order to reach this goal, the State Treasury has developed a method together with other government employers where the role of the workplaces in supporting the employees’ capacity for work and planning and implementing sufficient rehabilitation is key. This also strives to make workplaces aware of the significance of their own organisational and cultural operating methods for the preservation of their employees’ capacity for work.

State Treasury employees in the summer of 1989.