1 January 1901 New State Treasury regulations (from 1899) governing the State’s cash flow and accounting system come into force. It had already been noticed in the late 1880s that the accounts of state agencies had been neglected, and cash deficits were regularly discovered during audits. Accounting had not been sufficiently centralised. Karl Langenskiöld can be dubbed the father of centralised accounts based on weekly and monthly reporting. He studied the matter by keeping up-to-date on the most recent developments in accounting by travelling around Europe. At the same time, Italian double-entry bookkeeping was adopted and the drafting of financial statements was transferred to the State Treasury.

Claiming and exchanging bonds and coupons, cash desk at Fabianinkatu in the 1940s.

The war years affected the operations of the State Treasury, too. The funds demanded by the wars were substantial and government debt increased alarmingly. The names of the loans issued during those years speak volumes: ‘Jälleenrakennuslaina’ (the rebuilding loan) and ‘Isänmaanlaina’ (the fatherland loan). The shift from central government to a wartime economy meant that there were hardly any state funds left over for investment.

As a result of the wars, the State Treasury paid compensation for loss of property and damages for 25 years.

The State Treasury committee of 1938 proposed that all of the money lending by the state be centralised to the State Treasury. The committee was concerned that loans were being issued by many agencies and instances, none of which kept records of all of the borrowers. This meant that the same borrower might be able to receive duplicate benefits. However, Parliament did not consider the issue important at the time and rejected the proposal.

The paying and collection of loans granted by professional agencies from the loans and budget fund remained tasks of the State Treasury. In addition to this, the State Treasury was (and still is) in charge of securities and drafting debt instruments. The loan sector grew quickly in the post-war era, and starting from 1949, the most important lending function shaped up to be the funding of housing developments, i.e. Arava loans. Other projects that needed loans included the construction of elementary schools and employment.

Towards the end of the 1950s, lending had increased tenfold compared to the 1930s, and by the 1960s, it had already increased twentyfold. The State surpassed commercial banks in terms of credit granting.

The pensions paid by the State were centralised to the State Treasury in stages starting from 1943. A separate pensions office was established for the purpose. In its first year, the office paid out pensions to a total of 57,000 pensioners. The number of transactions tripled compared to the previous year. The harmonisation continued for the following years.

The fund for the widows and orphans of civil servants and other similar pension funds were discontinued in 1952, and their assets and annual insurance premiums of 1% were pooled to form the family pension fund&nbsp; connected to the State Treasury. Other funds for widows and orphans of civil servants were also incorporated into the system. The board of directors of the fund granted pensions and burial allowances, and the State Treasury paid them. 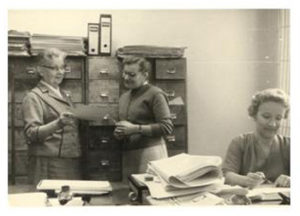 Archives management in the 1960s.

From the beginning of 1960, the State Treasury assumed responsibility for the family pensions and burial allowances for government employees, and the granting of pensions was transferred to the State Treasury. There had previously been a total of seventy authorities that granted pensions. The Government wanted to make the system more uniform especially because it wanted to harmonise the interpretations, reduce complaints and reveal any issues that needed to be reformed. The offices could also adopt new office technology.

A separate body, ‘Eläkelautakunta’ or the pension committee, was established for pension matters. It was chaired by a representative of the Ministry of Finance.

The grounds for the transfer became invalid in thirty years, however, and in 1965 the drafting of the state’s financial statement and general accounting were transferred back to the State Treasury. 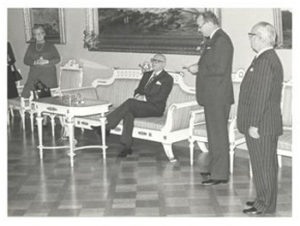 President Kekkonen participated in the centennial celebration of the State Treasury in 1976.

The 1970s saw the redesign of central government accounting, and the State Treasury was to have a prominent role in it. The redesign of central government accounting included a transfer to automated data processing, a decentralisation policy affecting the accounts office and a more comprehensive utilisation of the post office savings bank. In 1972, the development of the cash flow management and central accounting of the state was added to the tasks of the State Treasury.

1976 The centennial of the State Treasury was celebrated in 1976 with President Kekkonen in attendance.